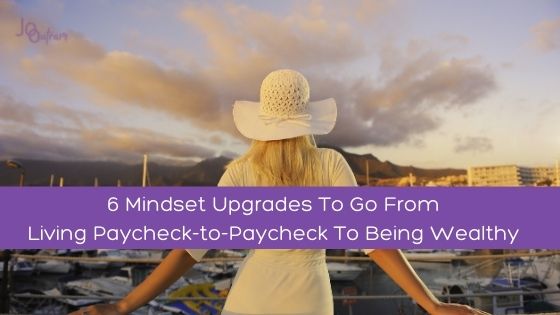 6 Mindset upgrades to go from living paycheck-to-paycheck to being wealthy.

Right now, you might be like the majority of the population and living paycheck to paycheck, but deep down, you know that life could be better.

What if you found out that the only thing standing between you and real wealth was your mindset?

Here are six mindset differences between those living paycheck to paycheck and those that are wealthy:

The wealthy take control of their life rather than feeling like their lives control them.

Only when you appreciate that your destiny lies solely in your hands and you take full responsibility for what happens, can you possibly create a path that will take your life in an entirely new direction.

The wealthy take chances rather than settling for what is safe.

You will never get ahead if you’re embracing the status quo. You’re going to have to take a risk if you expect to win. These risks don’t have to be wild, all or nothing style risks, but some level of risk will need to be accepted.

Wealthy people take action rather than just dream about a better life.

The desire for a different life is nothing more than that – an empty desire unless you commit to taking action.

No one ever gets ahead by sitting around and dreaming about the future that they might have. You make advances in your circumstances because you do things to get there.

Wealthy people reach for the stars.

If your goals are small, you’re less likely to achieve them. Why? Because you have no reason to push yourself if the goal is too small. You’ll never gain the impetus to try, or even to justify the hard work you’re putting in to get there.

Wealthy people embrace an abundance mindset rather than focusing on scarcity.

When the wealthy see someone who is very successful, they see someone to admire because they realize there’s plenty of resources to go around.

When you have a scarcity mindset, you see only see someone who takes more than their fair share of the money (feeling it’s a finite resource) and so they become resentful.

Wealthy people don’t let fear hold them back and will push themselves out of their comfort zone.

Remember, by making mindset upgrades; you will likewise shift your situation. How you do that is by understanding what the actual difference is between an attitude of wealth and the attitudes that are holding you back.